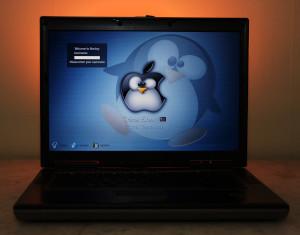 One of the main reasons I want to become financially free is to get rid of 'the need to work'. Don't get me wrong. I like to work, but only because it's fun and not because I need to pay the bills or have an interesting career I can impress others with.

Currently, I still work as a Linux Engineer, because that's what I've been doing for the last 12 years or so (I was a Novell Engineer before that) and I do a decent job. It's mildly interesting and it generates a very good income. It wouldn't be my dream choice, but it is certainly the smartest choice for now. Actually, a Linux Engineer generates a fairly basic 'IT' income, but as a self-employed engineer I earn about 3 times more than my colleagues. On the downside, however, I do bare more risks in the case of job loss or health issues. If something happens I would get no benefits from the government.

The best thing about working as a Linux Engineer is that ever since I started there has always been a high demand for people with this particular knowledge. So, even during difficult times (e.g.: the financial crisis of 2008 or the current Coronacrisis) I always had plenty of work. On a very regular basis recruiters would find me, either through my website or via LinkedIn, and then send me messages with job offers. After the first few years I got a good feel of who I can trust and which recruiters I should just ignore.

how have you been? I'm looking for a Linux specialist.

On what number can I call you?"

The recruiter talks to me like we're friends, but I have never met him before. I simply don't know him. Also, he doesn't give me any job details, he doesn't tell me where it is and what they're willing to pay me. In the beginning I would always ask them for more details about the job offer only to find out that the job doesn't suit my profile at all, because they're actually looking for a Windows Engineer who also happens to know a thing or two about Linux. I soon discovered I'm better of just ignoring these kind of emails.

But these aren't even the worst recruiters. I have loads of horrible stories about recruiters lying, cheating and deceiving their way into a commission.

Yesterday I got another email from a recruiter and I just want to tell you about it. He didn't introduce himself and gave very little detail about the job offer. Usually I would simply ignore these emails, but this email I had to reply to. I was in a giddy mood. He started his email with "Dear Ronald" and that is not my name. A very sloppy mistake. So I replied his email starting with "Hello Henk", which wasn't his name either, and I declined his offer signing off with "kind regards, Ronald". My email address clearly states a different name so maybe he will notice his mistake or maybe he will just be very confused. Either way, I'm not interested.

In the past I would even get job offers from recruiters for a job I was already in. This one time, a recruiter who got me a particular job would call me several months later to offer me the very same job again, while I was still working there. This was particularly silly, because I was sending him monthly invoices for my services and he would send the company where I was working a slightly higher invoice (this is how recruiters often make money).

Thankfully, I also know quite a few really good, friendly and professional recruiters. Those are the ones I do business with. And with great pleasure.

Do you also have outrageous stories involving recruiters? Share them by commenting this article.