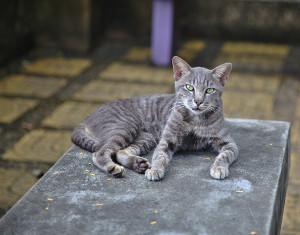 In English the title of this article basically means that I'm going to write about any illness I'm suffering from. Some Dutch readers could possibly mistake this title for 'mijn conditie' which roughly translate into English as 'my current state of fitness'. Whether or not I'm capable of running to end of the street without collapsing into a sad puddle of human flesh gasping for air. But no, I'm going to write about my condition, hay fever.

The correct term is Allergic rhinitis and I have yet to find a cure for it.

I never had this problem before. I first noticed it in the spring of 2003. Suddenly, my nose and eyes got all itchy and scratchy on me. I was hoping that as sudden as it appeared it would also go away. Unfortunately, it hasn't (that is, not yet). It has now been over 16 years and it seems like it's getting a little bit worse every year.

The symptoms are always the same. My eyes and nose get very very very very (you get the idea) itchy and I sneeze a lot. Sometimes it gets so bad that my throat swells up and I start to get wheezy. This mostly happens in the spring. Drinking cold water and eating ice popsicles help a lot, but they just ease the suffering. It's not a cure.

And I'm not alone in this. A rough estimate by a well known Dutch University tells us that about 30% of the population in The Netherlands suffer from some form of hey fever and that we spend up to 3 billion Euros on medication every year. That's about 3,3 billion US Dollars, 100 billion Thai Baht or ~46,665,901,264,704 Indonesian Rupiah!

Most of it is over-the-counter medication you can buy without a prescription. I took loratadine and cetirizine pills for a long time, but they only suppress the symptoms for a few hours and I'm only allowed to take one pill a day. I stopped taking these pills on a regular bases. Now I only take them when it gets really bad or when I visit friends who have cats.

Even though 30% of the total population may seem like a lot, most people are only affected by hey fever for a short time in the spring and summer when the country is "blooming". However, I'm one of the lucky people who can enjoy various forms of hey fever all year long. Even in the winter, because hey fever doesn't just mean you're allergic to pollen. In my case I also get the symptoms from dust, air pollution, fungi and cats.

I think air pollution and birch trees are the worst contributors for me.

I often notice that people who don't suffer from hey fever, also don't really understand how much it can affect my daily quality of life. Sure, it will not kill me (or will it?), but it does put pressure on my sense of freedom and it hurts. For instance, I love riding my motorcycle. Especially in the spring and summer when the weather is nice, but when I get home after a few hours my eyes and nose are so itchy that it hurts and I'm incapacitated for the remainder of the day. Rubbing my eyes only makes it (a lot) worse. I spent most of my days with tears in my eyes. Not because I'm sad, but because my body is simply trying to fight of the allergy. It's irritating and it hurts.

Apart from itchy eyes I also developed a thing called 'panda eyes' or 'raccoon eyes'. This is a discoloration of the skin around the eyes which make me look like Kung Fu panda, but I'm certainly no dragon warrior. I went to see my doctor about this, but she was completely clueless. The discoloration isn't yet that obvious, but it's noticable and it bugs me. I think it is due to hey fever and most likely because I rub my eyes when it itches, but without a doctor telling me what it is I can't be sure of it. Until then I don't really know how to solve it either. Many people say that Dutch healthcare is one of the best, but I have my (serious) doubts.

I noticed that I have very little or no symptoms at all when I'm on vacation (far away from The Netherlands). Even in Ho Chi Mihn City with it's millions of motorbikes and lots of air pollution I had no itchy eyes (or nose). It is one of many reasons why I'm strongly considering moving out of the country. Being it temporarily of permanent.

To cure or ease my hey fever I've also tried lotions and facial steam baths, but so far without any result. If anyone has some advise or tips, please send me a comment below.

Until I find a solution I comfort myself by realizing that other people have far greater issues then hey fever.