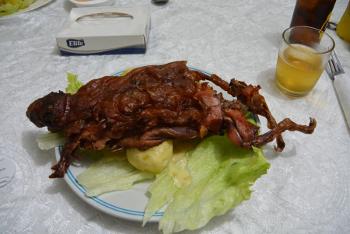 When you search the internet for a definition of frugality most say it means "the quality of being frugal, sparing, thrifty, prudent or economical in the consumption of consumable resources such as food, time or money, and avoiding waste, lavishness or extravagance". For me frugality stands for freedom and independence. A more down to earth way of explaining frugality is "to create or fix things yourself, don't waste anything and do not buy any stupid crap you don't really want or need". The more money you spend on luxury items the further away you are from becoming financially independent. Of course, there is much more to it than just this, but it gives you a basic idea of what it means and most people apply only those aspects of frugality to their daily routine that most suites them.

Frugality is not about NOT spending money and living like a poor man (or woman), it's about spending your money wisely and only on the things (items or consumables) you really need or want. Remember that you have to work for this money, so think about how many hours you would have to spend in the office (or other workplace) to be able to  buy an iPad and if it's worth all the time and effort you put into it. Will the iPad make you happy enough that you wouldn't mind having to work a full week more for it? Think about this every time you want to buy something, be honest to yourself and make a rational decision. You'll thank yourself later, I promise.

Usually, when I start something new I start slow and small. That way, If I don't like it or don't follow through or simply fail there will be no great harm done. So I started my frugal lifestyle slowly by eating more left-overs instead of buying new food and discard the 'old' but still delicious food. I found out that I would eat less and also spend less at the grocery store. My first victory, but I need to be sure I don't slack off and return to my old habits. Next was outdoor food. Why spend €5 a day on lunch (at the cafeteria or a deli) when you can buy €5 worth of bread and condiments in the grocery store and eat for the whole week! It may not sound like a lot of money to save, but when you add up all the little things you'll end up with a small pile of money you can then invest to make it grow and work for you.

I hear you say "why should I be frugal? I have a great job and enough money. I don't need to live frugal". That may be so, but like many other people I know most people often have debts. They buy things, because it makes them happy. It makes them feel important and socially accepted. So they buy large and expensive things in order to present themselves to the world as worthy. You can not show up at work in your Fiat Panda, you need a big ass Audi or a BMW. Only then will your co-workers take you seriously. People often think they have enough money, but what would happen if your secure steady job suddenly disappears (like many other jobs suddenly disappeared in 2008)? You would end up with no (or very little) income and a huge mortgage and other large bills to pay. You're probably also paying a lot for your fancy car. Family holidays to exotic destinations suddenly aren't possible any more and every bill to pay suddenly looks like a huge sum of money. A common misconception is that having a job gives you financial security while in fact it doesn't. When you loose it, you'll know.

The best way to make sure that you really have enough money is to stop spending money on things that you don't really need or want. Save money (invest!) and pay off your debts as soon as possible. I used to have a student loan of about €16.000 when I graduated from Applied Mathematics. When I had saved up some serious cash I paid off all the debt (still well over €9600 at the time) at once. Now I'm truly debt-free and it feels great!! Only when you have no debts you can really live free and start saving for financial independence. One of the more obvious advice is of course, don't spend money you don't have! The economic crisis in 2008 was mostly caused by banks giving huge loans to people who actually couldn't afford it. Mostly in the form of a mortgage.

If you're a millionaire who doesn't know what to do with all your money, then NO, but consider donating some of it directly to someone who actually needs it.