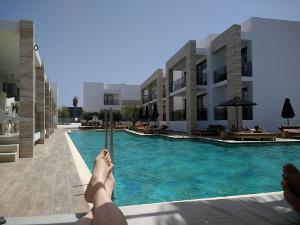 I have to say that when I first heard that some one was saving money to retire early I was very sceptical. My first responds was that it was silly. To be able to retire early you would need a lot of money and it would be impossible to save that much money in such a short time. However, I didn' t know much about early retirement so I didn't express any strong opinions at the time. Which is very un-Dutch of me. Us Dutch are well know for being direct and straight forward (or downright blunt and rude if you ask me), but I just expressed mild scepticism.

Now that I'm somewhat more educated on the subject I know the principals on becoming financial independent and I also know that it is possible and not as silly as I once thought. However, many people still think it is a crazy idea and that it won't work. And some people are not shy on telling me how they feel about it.

For instance, in 2015 I was working for the Dutch office of a large Swedish telecommunications company. One day a colleague of mine and I were talking about investing money. He was a bit of a  big spender. You know, big house, big expensive car and lots of electronic gadgets he didn't really need or use. So, I explained to him I was following the FI principals to become financially independent as soon as possible. I didn't have any debts anymore, I was living fairly frugal and I invested a large part of my income into Vanguard ETF's to make it grow. He was not at all intrigued by my story. As a matter of fact, he then said: "so you want to live like a poor man now for a several decades, just so you can retire a little bit earlier?". This guy actually believed I lived in a house with no running water or electricity and that I ate cold beans straight from the can while sitting by the one candle I had burning. I tried to tell him that he couldn't be more wrong, but to no avail. His ignorance was a bit of a surprise to me, but it didn't really bother me. It did, however, made me realize that many people don't understand FI and that I could expect a lot more negative remarks in the near future. Btw: the picture in this post is from a luxury vacation my girlfriend and I took in Greece in 2018.

So the misconception here is that people think you have to live uncomfortably for quite a while in order to retire a bit early, but that's not right. It's about living frugal in a way that suites you enabling you to invest the surplus and make your savings grow, fast. It's quite possible to cut down spending and still be happy. As a matter of fact, cutting down spending can increase your happiness. Often people buy luxury items to make themselves feel happy (after a grueling time at work), but that only last a short time and then you're left with more, expensive, clutter. And further away from financial independence.

Another misconception is that people think it is impossible to save enough money to retire early, but if you're flexible enough to stick to the plan you might suddenly find yourself within reach of financial independence. Maybe even sooner than you think. It mostly depends on how much money you can save each month. This is expressed in percentages, because if you can save 50% of your monthly income, you will then know how much you need every month and the amount you need differs from person to person. Also, when you quit your job you will notice that your spending will also go down, because certain expenses are no longer necessary. You might even start a small business and earn some extra cash. Adding more money and security to your financial freedom.

One more misconception is that people think I'm saving for early retirement. They think that once I reach my financial independence I will go on sea cruises, drink cocktails and do nothing all day. But that's not it. When I reach my financial independence goal I am free to do whatever I want. I will probably turn several hobbies into businesses and generate extra cash while doing something I love. Without having to stress about money.

I'm currently in an exceptionally great situation and I'm able to invest about 70% of my income. After some rough calculations and reading several blogs I estimate it will take me about 11 years to become financially independent. I started about 5,5 years ago and I'm still on course. If all goes well and I just stick to the plan I should be able to become financially independent by the age of 46. Not as young as I hoped, but still well before the age of 67, the current Dutch pension age. I'm able to save so much money, because I'm a self employed IT Engineer, which generates a high income, and I have low living expenses. Sometimes I do stray from the path and carelessly spend some serious cash, but it's still within acceptable bounderies. However, I can (and should) work a bit harder on improving my frugal skills without giving up to much comfort.